The current scene in the Bay Area region is very much hipster (as known by all residents of the world). Gone were the days when toast just referred to that brown piece of cardboard popping out of the toaster. Artisanal bread, topped with what may seem like “mundane” toppings – cheese, jam, nuts and fruits is all the rage. And oh no, not just regular jam, but jam made with organic farmed fruits, farm fresh cheese and nuts. I wanted to experience this trend as much as I could before people realized that they were just getting excited about bread, and jumped on a newer, more basic bandwagon.

[Listen to this piece by This American Life. Read this article in The New Yorker.]

I had read about a couple of popular places that embody this trend . The Husband who struggles to be up to date with the hipster world stumbled upon a cafe late last year and described (failingly) the amazing breakfast he had that featured fruits on toast. After surfing Yelp I decided that I needed to experience this new trend. Hence I was led to farm:table (reads farm to table not farm *cricket sound* table as pronounce by a noob (not me)).

Farm:table is a tiny, Harry Potter’s-bedroom-under-the-stairs sized cafe? restaurant? breakfast area. While there is a little more variety in the menu by way of croissants, eggs and pastries the star of this establishment is toasted bread (varies daily) generously slathered with butter, topped with mascaporne cheese and assorted fruits, with a sprinkle of nuts. Sounds pretty basic, I know. Even the husband mused, “Who would think to put fruit on bread!”, and then paused to realize that jam was essentially canned fruit.

But believe me when I say that this variety of toast was like nothing I’ve ever tasted before and was definitely not basic. Each bite was at once creamy, crunchy and fruity. It is probably one of the best breakfasts I’ve had, a great departure from my usual breakfast of bread and fried egg. I would return to farm:table in a heart beat if I didn’t live an hour away. But make no mistake, I will be making the trek the next chance I get! 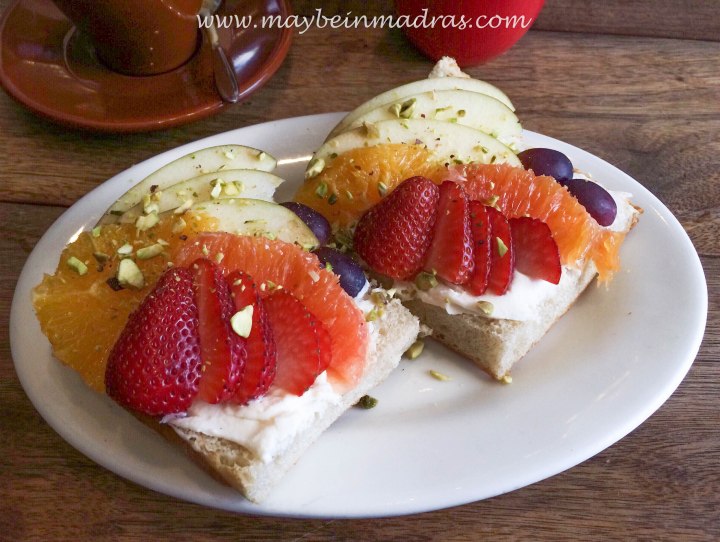 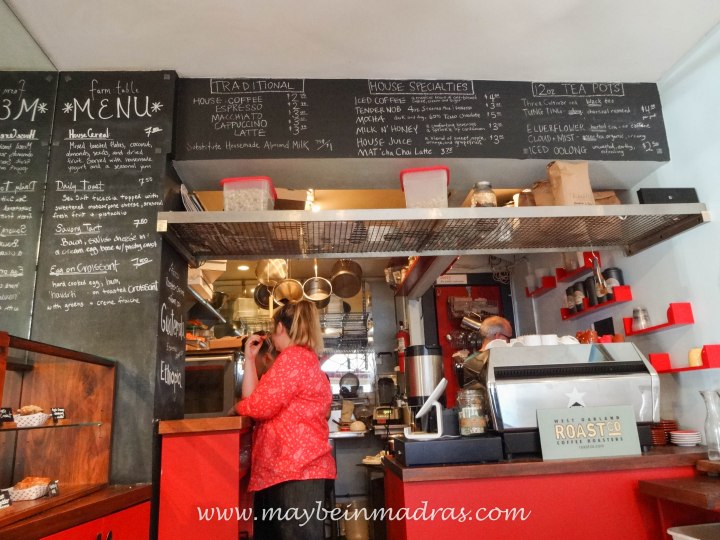 When we started discussing about our trip to Europe, the first thing I was super excited for was – breakfast. To rephrase, breakfast in Paris. I am a sucker for all things loaded with carbs, and bread, is my weakness. I’m the person who loads up on free bread and butter in restaurants although a good main course is next. There is this Italian restaurant near my house that serves mediocre food but their whipped butter and fresh bread is killer. I LOVE that place. So obviously I was very psyched to try all the different croissants and baguettes.

I’ve had my share of decent croissants but guys, believe the hype when I say that the French take croissants to a whole new level! The first day we decided to have breakfast at one of the many cafés that were strewn around our hotel. All cafés in Paris follow the same theme – red, they all have outside seating and EVERYONE smokes. The tables outside these cafés are placed so close together you could totally join in the conversations and pick food off each others tables without even stretching. One day we decided to have lunch in the outside seating area and this guy was blowing smoke in my face throughout the whole meal. It was unpleasant to say the least.

While visiting most cafés we realized that the ‘locals’ had their coffee standing at the bar. We were the noob tourists “sitting down” for coffee. We later realized that coffee served at the bar is infinitely more cheaper than if you “sat down”. Its one of those “European” things that I don’t get.

Most cafés have a set breakfast menu offering one of each treat – croissant, baguette, pain au chocolat. We tried the breakfast set for a couple of days and switched things up with the Nutella crepes (chewy, chocolatey goodness) and Norwegian smoked salmon with the fluffiest, creamiest, most decadent scrambled eggs I’ve ever had the pleasure of eating. Coffee in Paris is good enough, but the coffee in Rome was the best. If you are visiting Paris first I’d recommend holding off a little on the food until you visit Rome, because that is where the magic lies. 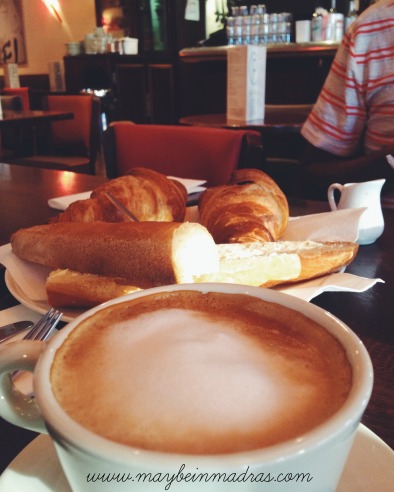 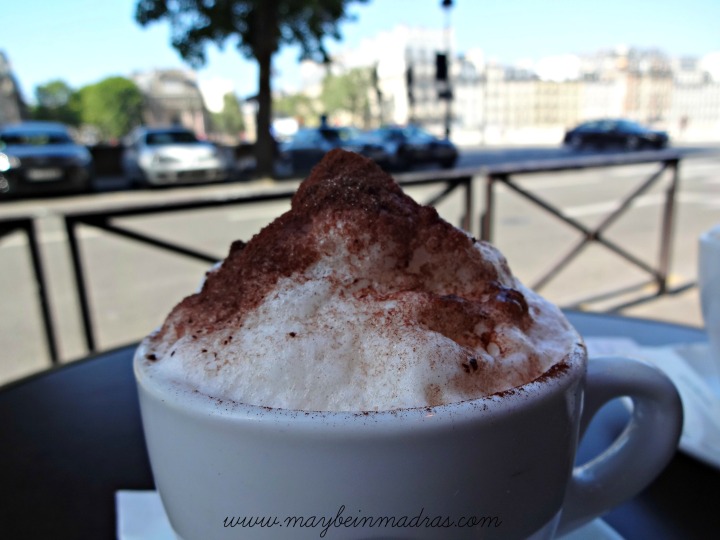 “What shall we have for breakfast?”

“Here have a banana.”

“No. I want something else.”

“There is nothing else. Don’t have breakfast.”

“Just eat something and stop annoying me.”

“I feel like French toast. There’s some old white bread.”

“No white bread. You should stop eating, you fatso!”

“So French toast with some butter and powdered sugar will be good.”

“But I haven’t had buttered toast in forever!”

“Its okay. No breakfast.”

I had French toast for breakfast. 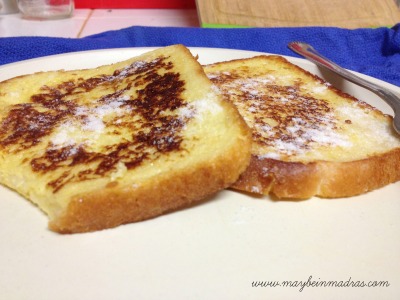