Last week I found out through Instagram that California was having its first halal food fest. Since food and I are BFFs I immediately searched for the location of said event and estimated how far it is from where I live. Half an hour? Not bad. An SOS was sent to Jay and Saturday morning saw me skimping on breakfast to make extra room for all the delicious halal food I was going to ingest.

We reached an hour and a half after the fest started. The stalls didn’t accept cash. We had to buy tokens that were sold at the two ends. In order to use time efficiently Jay and I each stood in one of the lines. The place was busy but as soon as the lines got smaller they ran out of tokens. We had to wait a good twenty minutes until they were replenished.

There were a decent number of food stalls – Indian food, Thai, South African and a BBQ place, cupcakes, shaved ice and bean pies. I felt the number of stalls for the amount of people that turned up was less. We had to stand in long lines to buy the food and longer lines for pick up. But I had come for my chicken wings and I would get them come hell or high water!

The South African chicken wings from New Africa Kitchen, Oakland were freshly fried and delicious. I gobbled them up while waiting in  line for burgers from the newly opened King’s BBQ and Grill, Fremont. The people making the burgers and the girls in charge were extremely efficient. I was looking forward to try the brisket but they were sold out.

We had a few more tokens left and ideally I would spend them on more meat but it was around 1.00 pm by then and the lines were insane! Instead we had a Caramel Scotch cupcakes at Rajabelle’s. The frosting was on point! So decadent! Definitely one of the best cupcakes I’ve had.

The last few tokens were spent on Hawaiian shaved ice which was a fancy version of the humble Indian gola, except you could get three flavors in one serving.

Overall I had a pretty fun time at the Halalfest. I just feel some aspects could have been better organized like the seating area and crowd management, but apart from that it was good for a first time event. I can’t wait for next year!

Below are some pictures I managed to click. There aren’t too many pictures of food as I was either busy eating them or buying them. 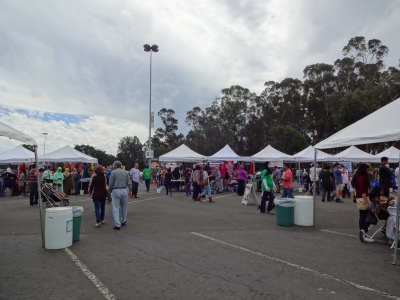